There are very few cardiologists experienced enough to write on the QT interval. I am not one of them. However, I would like to review aspects of the topic and discuss some of the controversies.

QT measurements on the ECG help assess the risk of potentially lethal ventricular arrhythmias. The measured interval is from the commencement of the QRS to the termination of the T wave, which is not as easy as it sounds. Because the QT interval shortens with tachycardia and lengthens with bradycardia, it should be corrected for a standard rate of 60 bpm. This corrected value is referred to as the QTc interval.

QT measurements can be manually performed or determined by computerized analysis. Because many cardiologists and even electrophysiologists are not experienced enough to measure the QT interval, they depend on the automated ECG software analysis, which can over- and under-estimate the value. In general, with a high quality ECG tracing, the automated measurements appear accurate and are very valuable to demonstrate changes, particularly attributable to drug therapy. However, it is imperative that if abnormal values or changes occur, then manual confirmation be undertaken, and if necessary, the ECG be repeated to confirm the change.

How do I measure the QT interval?

The main lead used to measure the QT interval, in an otherwise normal ECG, is lead II. This is because the vector axis and size are often the best for measurement. Also lead II is usually the rhythm strip, thus providing the most QRS-T complexes as usually three, and if possible, successive QRS-T complexes should be measured in sinus rhythm.  Of interest, QT measurements are said to be longest in this lead with long QT syndrome. In cases where the termination of the T wave is not easy to determine, measurements can also be performed on the lateral chest leads; V5, V6.

For consistency and reproducibility, the “maximum slope intercept” or “tangent” method is recommended to define the termination of the T wave. 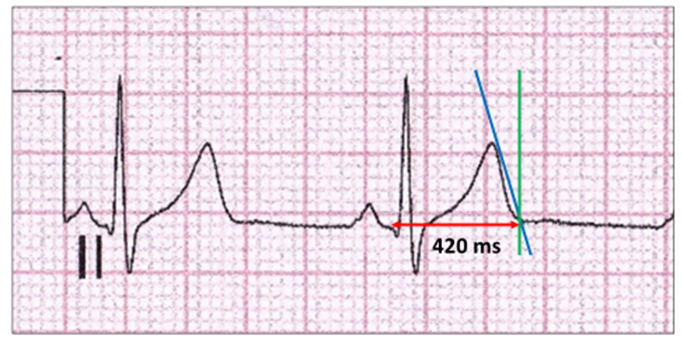 The QT interval (red arrow) is measured from the beginning of the QRS complex to the point of intersection between the tangent drawn through the maximum down slope (blue line) and the vertical line (green line), which transects it at the baseline.

The presence of a U wave always presents a dilemma. When fused into the T wave it is usually incorporated into the QT measurement as it is part of repolarization and hence the T wave. However, a separate U wave would extend the T wave and result in erroneous measurements. By definition, this would  be a QU measurement. Thus, by convention in everyday practice, these separate waves are usually ignored.

Some authorities recommend that when a prominent U wave is present, it is preferable to define the end of the T wave at the point where the wave is lowest or on the baseline referred to as the TU nadir (red vertical line). As can be seen, this is slightly longer than the tangent method (green vertical line).

With T wave inversion, the tangent is upward rather than downward, as in this case of complete heart block.

There are numerous situations where QT measurements are difficult or controversial. These include absent T waves, sinus arrhythmia, bundle branch blocks, frequent ectopy, and atrial arrhythmias such as atrial fibrillation.

QT correction for heart rate or QTc is a critical component in the evaluation of abnormal QT measurements. Simply put, the correction readjusts the QT interval to what it would be at 60 bpm. It is imperfect and full of inconsistencies. The first and still the most utilized correction formula was the one designed by Bazett over a 100- years ago. It is most accurate when the sinus rate lies between 60 and 100 bpm. The Bazett formula both under-corrects at over-corrects, when the heart rates are fast or slow. The Fridericia correction is also limited at slower heart rates, but more accurate than Bazett’s at faster heart rates.  Both of these corrections are logarithmic, whereas the Hodges and Framingham formulae are linear and are more accurate over wider sinus rate changes. Once corrected, a range of normal and abnormal values can be determined. This is now often depicted on a scale. 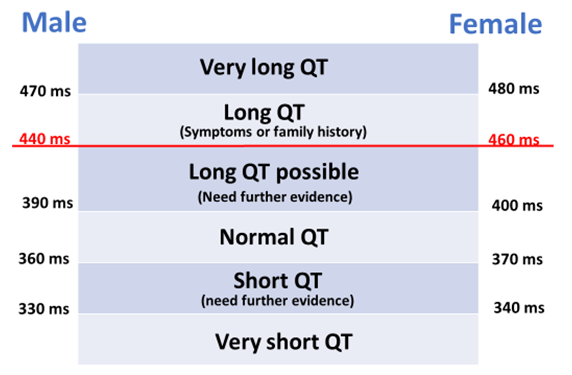 Once again, the limits of these values are not universal as there are no single cut-off values that reliably separate long or short QT intervals from normal controls. Those in the very long and very short QT interval groups, are much more likely to develop lethal ventricular tachyarrhythmias. As a working rule, I accept 450 ms as the upper limits of normal, when reporting ECGs. When unsure during ECG reporting, I often use the term “borderline long QT interval” with QT intervals a little longer than these limits. Indeed, with secondary causes of long QT intervals, some authorities use 500 ms as a cut-off value.

Let us now look at how correction of the QT interval with the various formulae can cause confusion. The automated values are from the ECG report and the values in red font are manually derived. Because of possible sinus arrhythmia, the R-R intervals and heart rates are those determined by the automated measurements. 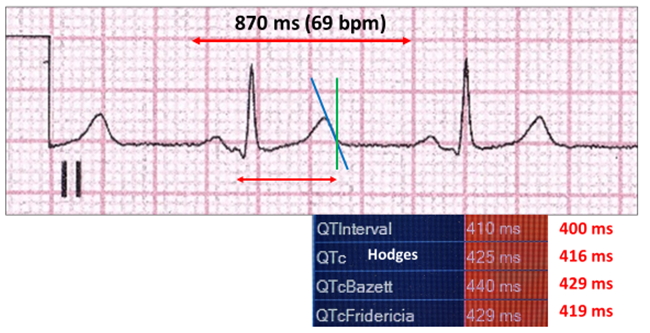 QTc is normal with Bazett’s the outlier. Automated and measured are similar.

Sinus tachycardia: The QT interval shortens, and correction lengthens it.

With a tachycardia, Bazett overcorrects with a borderline long QT interval.

Sinus tachycardia (neonate). ECGs are performed if there is a family history of sudden cardiac death. Measured and automated values are similar. Bazett and Hodges overcorrect.

Measured and automated values are similar. Once again, Bazett is the outlier.

Complete heart block: Although the rhythm is sinus, the QRS-T waves are independent of P waves and T wave changes occur.

The automated and manual calculations differ with manual values correct.

Long QT with bradycardia. Highlights the limitation of the Bazett correction, which is very different to Hodges and Fridericia.

With values greater than 340 ms, further evidence is required to determine the risk of lethal ventricular arrhythmias. With very short QT intervals (<340 ms), the T waves are peaked and there is almost no baseline ST segment.