Today, it is unusual to see an electrocardiograph (ECG) with the diagnosis of Wandering Atrial Pacemaker, but when we do, it is often incorrect. The last one I saw was a marked sinus arrhythmia with unifocal atrial ectopics and it is important to differentiate these two diagnoses as the treatment and prognosis are very different.

Wandering atrial pacemaker, as the name implies, is an irregular ECG rhythm which wanders from sinus to at least two other different atrial ectopic foci resulting in P waves with three different morphologies.

Here is an example: 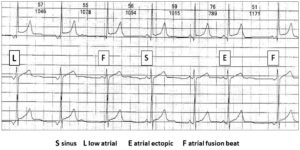 The rate is slow and there are two atrial ectopic foci: crista terminalis (looks like the sinus P wave), low atrial (inverted P waves), and not surprisingly, atrial fusion beats with maybe more than one P wave morphology. Clearly, the atrium is very irritable, and therefore the rhythm is a precursor to atrial fibrillation. The term chaotic atrial mechanism is also used. Most examples of this rhythm are difficult to diagnose because the rhythm is faster than 100 bpm and hence is called multifocal atrial tachycardia.

In the past this ECG was seen with severe cor pulmonale, cyanosis and right heart disease. The uncontrolled atrial fibrillation in such a sick patient was often a terminal event.